Two Sides to Every Coin 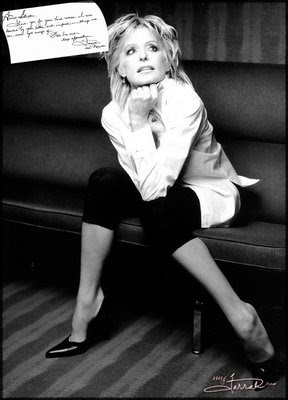 I had the fortune of speaking with Greg Lott yesterday. He has been Farrah’s business partner with her official web site (http://www.farrahfawcett.us/.) since its inception. Their relationship and friendship has withstood the sands of time and Greg has spoken with her every day for the last eleven years (they've been friends for over forty years). Greg has been in Los Angeles since Easter when communication with Fawcett stopped. His main concern and focus is for her welfare.

I’d like to think that everyone surrounding Farrah is only interested in her well being, comfort and continued fight. To think the contrary of those directly involved is disturbing, sad and disquieting. Suffice is to say I don’t know Gregg, Alana, Ryan or anyone in Fawcett’s direct circle.
This website was created to celebrate the actress/actor Farrah Fawcett, her accomplishments on the screen, big and small. It’s been a hobby and one of the website’s I first built. It changes as I learn and grow as a designer and a web coder. But I’ve always attempted to steer clear of the gossip, the negative news stories and always veered as far away from the rumor mill that has engulfed Fawcett since her days on Charlie’s Angels.

I could hear the anger, hurt and frustration in Greg’s voice. Those are things you can not fake. There’s an urgency and a true love there for Farrah, in my opinion, and I guess I don’t see the harm or reasoning behind his excommunication.

The bottom line here is: when a family member or a true friend becomes ill, there are many things that are said, shared or stated in anger, pain, love, hurt, and basically a variety of emotions. The unfortunate side effect of living in a very technological society today is people often post things or write things that are baseless, inflammatory, or do a disservice to their own cause.

However, having lost a brother myself, and having watched as both of my parents fell ill (broken hip, Heart Attack, Pneumonia) and various hospital stays, the reality is as we grow older, regardless of how well we take care of ourselves, the body wears and deteriorates over time. It’s the natural process of life. Degeneration. But there are other maladies, such as Cancer, that can wreak havoc without us being able to comprehend why.

It’s not easy watching or witnessing someone in distress, in pain, suffering and clutching to hope and believing in miracles that sometimes, never come. But the only reason to severe or cut people away (aside from medical seclusion) is because there is something to be hidden or to remove people from their ability to say good-bye, good-luck or just a simple, “I love you.”

Fawcett has often been quoted as saying, “Positivity is essential.” So, in that vein wouldn’t it be in the best interest of everyone to lay down their arms, call a truce and let those that care and love and know her extend their good wishes?
at 7:03 AM