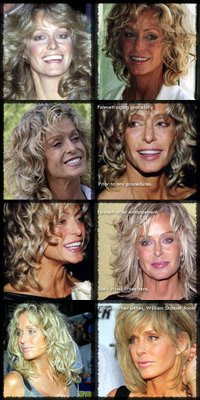 I’ve been holding off on commenting on some of the really mean and ugly articles that have circulated about Farrah in the past and most recently stating that in the end, Fawcett didn’t resemble herself.

First, no one, I would think, would consent to undergoing surgery to change, alter or “re-fresh” themselves without thinking or hoping to look/resemble who they were in years gone by. Especially someone who is famous and knows they will be compared via split screen and scrutinized for every line, crease or evidence of aging. Most of Hollywood, and for that matter, most of the world now; refreshes/renews and revitalizes by way of a surgeon.

If you look at Fawcett prior to 2000, she’d lost the muscular structure in her jowls, face and appeared very thin in her facial features. I would surmise that someone promised her that they could enhance and refresh what was lost.

Now, Farrah was extremely athletic. As we age, our bodies change and when/as you get older, and you loose weight or tighten up, the muscular structure changes. It was most apparent in Fawcett’s face. I still think she was beautiful but I would crumble as most would under the kind of criticism so easily passed around Hollywood. Having lived in Los Angeles for three years, I saw many friends go “under the knife.” Most were in their thirties. The pressure to be beautiful and ageless in Hollywood is very real and the reality is many actors/actress’s try to preserve what was there to maintain a financial income.

One very good friend, a very successful actress commented to me, “What am I going to do if I don’t have work?” She did not feel like she could work in the normal mainstream of America because of her notoriety and work as an entertainer. She had a full face-lift and wasn’t even 35.

In Fawcett’s case, the results were mixed. Her famous smile was rarely seen, her nose was off centered and too thin but the fullness of her face was back but over exaggerated. Over time, the fillers faded and Fawcett, at some point, corrected or had corrected the work that was done previously and by 2006, looked like her old self again.

I don’t know what she had done, and frankly, I don’t care. But the malicious writings and outright ugly speculation about what she did and why is really of no interest to me. It really diminishes who she was as an artist. Before hair enhancement or veneers, or surgeries were the norm, Farrah was the “IT” girl without any prosthetics or procedures. She also didn’t do anything surgical, I believe, until she was in her fifties.

It seems awfully easy to target someone who is no longer here to defend or explain themselves. And the real question here is why should she. Is it really anyone's business? She was a talented actress, a mother and someone who fought a valiant fight with Cancer. She didn’t go quietly. She had a great deal of pain and suffering and really just wanted to live. Fawcett was always more than her outer shell and to be diminished as the summation of just that and what developed later is truly sad, disrespectful and really hypocritical. The reality is plastic surgery is a reality for many people, not just in Los Angeles.

Like everyone, Fawcett saw things about herself she didn’t like. Even in her famous swimsuit poster. She didn’t like her legs, she thought she should’ve sucked her stomach in more, and she thought her smile was too big. Everyone has an Achilles heel, regardless of how seemingly beautiful they are. The reality is many people will get and seek out surgery to change, alter, correct or enhance what they already have or don’t have.

In my mind Fawcett will always be beautiful and not just physically.
at 4:13 PM