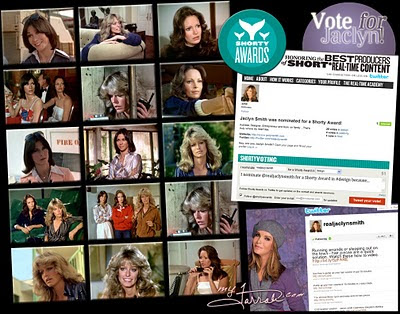 Vote for Jaclyn at this address 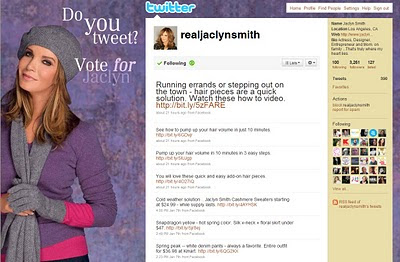 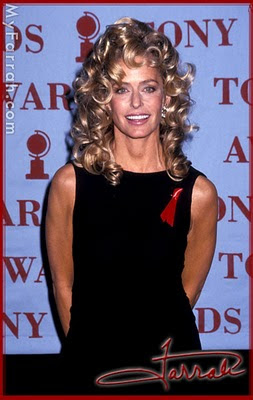 IN APPRECIATION
Remembering those who died in 2009
Farrah Fawcett's death in June was eclipsed by that of Michael Jackson, who died hours later. She was the style icon for generations of women, says Sasha Wilkins, fashion journalist. The Jennifer Aniston of her day, Farrah Fawcett became the female icon of a generation. To appreciate her influence on 1970s style, pick up any family photo album from around that time. At least half the women inside will be wearing high-waisted denim flares, with a tight bra-less T-shirt crowned by "the Farrah" - a confection of sun-kissed, flicked, feathered and layered bouffant hair that looked natural, but owed its volume to a strafing of industrial quantities of hairspray.
The key to the appeal of her wholesome good looks was its unthreatening obtainability. To men she was the girl next door, the apogee of natural, unaffected beauty. To women she represented an achievable, relaxed image. In an age where the celebrity stylist was yet to make its mark, Farrah was just herself It's difficult for children that came of age in the 1990s to understand the appeal of unadorned, unmanipulated beauty. To them Charlie's Angels doesn't automatically mean Farrah and her cast mates, Jacqueline and Kate, but instead Cameron, Lucy and Drew. Where we had Farrah and her hair, they had Demi and her plastic surgery.
But the 1970s was a very different time. Until Farrah and her fellow Charlie's Angels blazed on to British television screens, female British TV icons were terribly posh: Dame Diana Rigg, Joanna Lumley, Honor Blackman. Fantasy figures, sure, but no everyday bloke honestly thought he would have stood a chance. The Angels became the popular antidote to the previously prevailing stylish but unapproachable female. No gadgets, just babes. 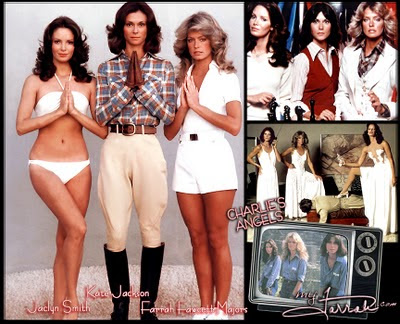 Charlie's Angels first appeared in 1976 as a TV movie. Farrah, along with Kate Jackson and Jaclyn Smith, played sassy private investigators for a detective agency run by Charles Townsend, a reclusive multi-millionaire whom the women had never met. Townsend referred to his employees as angels, a term that would never have got past the PC police in the 21st Century. The movie was so successful that a series was promptly commissioned, and TV history was made. Given the nature of our multi-media, multichannel viewing experience nowadays, it's easy to forget the vast impact of television in the 1970s.
A show like Charlie's Angels dominated the television landscape and became the cultural reference for an entire decade. It's no wonder Farrah and her cast mates became international superstars - they WERE the show. The Charlie's Angels of the 1970s is a reflection of a less sophisticated time. No technology, no CGI, no go-go-gadgets to distract the viewer from the pulchritudinous babes who carried the story. Farrah, who concealed a sharp brain and quick wit behind the pouffed-up hair, told TV Guide in a 1977 interview: "When the show was number three, I thought it was our acting. When we got to be number one, I decided it could only be because none of us wears a bra." 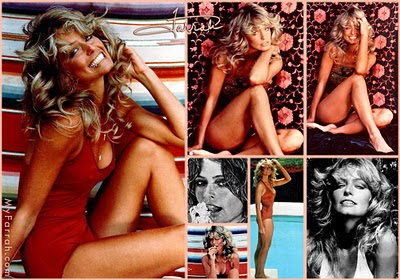 The real key to Farrah's resonance with men and with women was her styling. In an age where the celebrity stylist was yet to make its mark, Farrah was just herself. With her wide, ultra-white toothy grin, fluffy hair, jeans and sneakers she was the epitome of Californian wholesomeness. The open-necked, rolled sleeved gingham shirts, waisted jumpsuits and silky slip dresses looked simple and uncontrived. The hair was a different matter. Men may have been taken in by its artless bounce, but women knew better: the Farrah took time to achieve: "I'd curl, pin, curl, pin. And when it was done, I took the pins out, turned the hair upside down and brushed it out so you wouldn't have a 'set' look," her hairdresser Allen Edwards told a journalist. But it was the poster that made Farrah into a global sensation.
She was already well-known as a model before landing Charlie's Angels, and the poster, a collaboration between Fawcett and the photographer, was shot at her home before she was cast on the show. The success of Charlie's Angels sent sales of the poster into the millions. It's been estimated that it sold as many as 12 million copies, and Farrah received a royalty on each one. She was paid $5,000 (£3,123) per episode for the one season she appeared on the show, but is believed to have racked up over $400,000 (£249,801) in poster royalties. Farrah did her own make-up, wore her own swimsuit, picked out six frames from the 40 rolls of film shot on the day, marking out as her favourite the image that finally became the poster. She knew how to market herself. "The reason that the all-American boy prefers beauty to brains is that he can see better than he can think." When Farah Fawcett died this year, the dreams of the 1970s died with her.
Source: BBC
at 7:42 PM 1 comment: