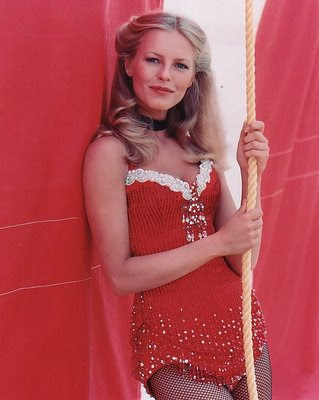 I have been meaning to write about Cheryl Ladd for some time now. I remember, being on the playground, in elementary school, when everyone, literally, was talking about Farrah Fawcett leaving Charlie’s Angels. Keep in mind, I grew up, mostly, in the mid-west. This was long before computers, cell phones or VCRs. Though they came shortly there after. Anyway… Cheryl Ladd joined Charlie’s Angels. She was and still is beautiful. I’ve never understood why she wasn’t in the reunions or at the tribute to Aaron Spelling. She worked with Fawcett (on six episodes) as Chris, Jill’s little sister. In fact Cheryl stayed the remainder of the run of CA and the only other angel to remain the entire run was Jaclyn Smith. Anyway… this is my last post of the morning… I’m just reminiscing a little about the Farrah phenomenon and was also thinking about Cheryl Ladd. Who wore a t-shirt the first day on the set that read, “Farrah Fawcett-Minor.” She’s been quoted as saying she didn’t want to do it, the series that is. Aaron Spelling persuaded her. Anyway, I had the great fortune of being an extra on a television movie, years ago and she was on set with John Schneider. I was just an extra and she went out of her way, to come over to the table I was seated at with another extra, during a break (I think they were setting lights) and she talked to us. She was so sweet and so beautiful and I have never forgotten that. She radiated an inner beauty that many people do not house or even have. I’ve met many physically beautiful people over the years, and some are as vacant and empty as a Styrofoam cup. But Cheryl was not. Anyway… I have meant to post this for quite sometime. She also said a very nice quote about Farrah’s passing, “I’m terribly sad about Farrah’s passing. She was incredibly brave and God will be welcoming her with open arms.”

And, for the record, I was perusing images of Cheryl yesterday on-line, umm, let’s just say, I don’t think anyone looks as good in a bikini as Cheryl did.