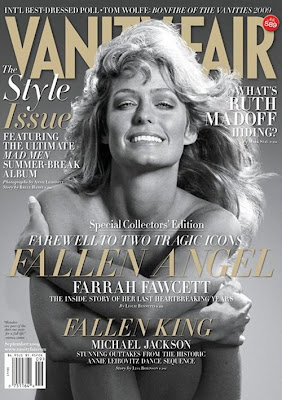 The latest issue of Vanity Fair has two covers, one featuring Fawcett the other featuring Jackson. Be sure to get a copy. It has an interesting article inside with interviews with Ryan O’Neal, Alana Stewart and others who were close to Fawcett. Also of note is the interview Griffin O’Neal gave to CNN regarding O’Neal and what his take on Ryan’s actions and what transpired throughout the relationship and even more so the night of the fiasco that was to be Fawcett’s birthday celebration. The O’Neal’s have a long and turbulent history of violence, substance abuse and difficulties that have been well documented over the years. It’s a sad reflection and focus after the passing of Fawcett. On a personal note, I wish they could’ve left Fawcett’s last moments to herself and between those in the room that experienced them. I think it’s poor form to relay and share that kind of moment with anyone other than family. There’s no “right to know” here.
at 10:09 AM No comments: