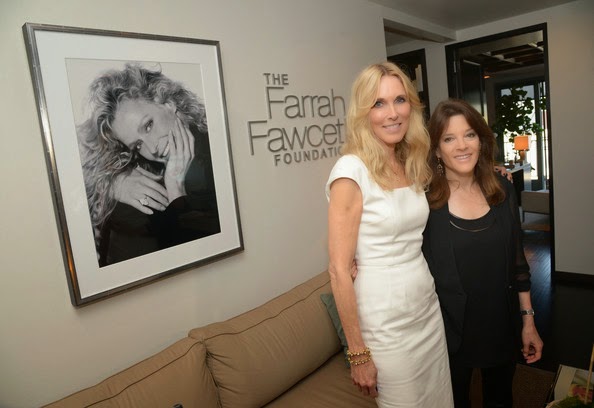 Actress Alana Stewart, as President of The Farrah Fawcett Foundation, is part of an ongoing mission—a mission to bring awareness and importance of continuing her late friend’s fight against cancer. 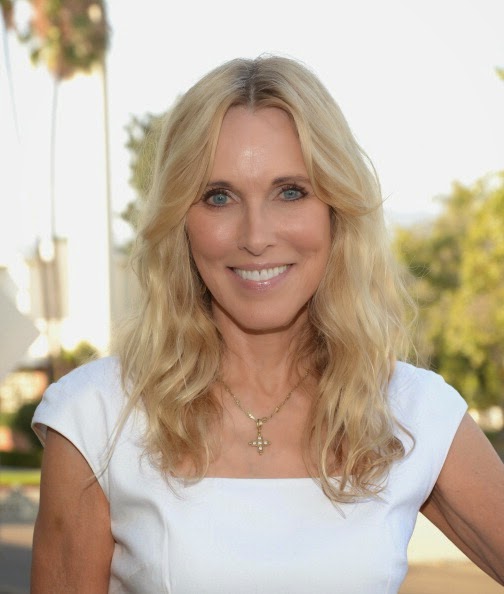 The importance of vaccination to help prevent subsequent cancer stemming from the HPV virus has thus been an important and ongoing initiative of Fawcett’s foundation.
“I’m so grateful to Michael Douglas for having spoken out about it [HPV], because that is what it really takes for people to be aware,” explained Stewart.

“If you know that there is a vaccine that you can give a young teenager that will prevent them from getting HPV and possibly cancer–that could save millions of lives,” added Stewart.

According to the CDC, high-risk human papilloma viruses (Types 16, 18) are responsible for the majority of anal cancers (the cancer that took Farrah’s life) and cervical cancers, as well as many vaginal, vulvar, penile, and oropharyngeal cancers.
In the US, over half of all new cases of oropharyngeal cancer are associated with HPV-16, with the incidence of HPV associated oral cancer increasing more sharply in men compared to women over the past 20 years. In fact, estimates are that HPV will be the cause of more cases of orophayngeal cancer than cervical cancer by 2020. Consistent and proper use of condoms has been shown to reduce the risk of transmission of HPV between sexual partners.


The Farrah Fawcett Foundation, which funds cutting edge research in memory of Farrah’s life, also provides patient assistance funds for those faced with mounting expenses during treatment along with special prevention programs.

This past spring, in fact, The Farrah Fawcett Foundation and Stand Up To Cancer joined together to commit $1 million dollars over three years to fund a collaborative translational research team to study HPV-related cancers.

Stand Up To Cancer (SU2C), a grassroots movement developing unique collaborative teams of researchers from multiple well known medical institutions, and a program of the Entertainment Industry Foundation (EIF), had three successful fundraising telecasts in 2008, 2010 and 2012.

SU2C will return to primetime television live on September 5th from the Dolby Theater in Los Angeles at 8 PM EST as the major networks (ABC, NBC, CBS CBS +1.34% and FOX) and major cable stations donate one hour of broadcasting time to raise funds.

Visit The Farrah Fawcett foundation at http://www.thefarrahfawcettfoundation.org
at 7:32 PM No comments:

Email ThisBlogThis!Share to TwitterShare to FacebookShare to Pinterest
Labels: Alana Stewart, Stand Up To Cancer, the farrah fawcett foundation 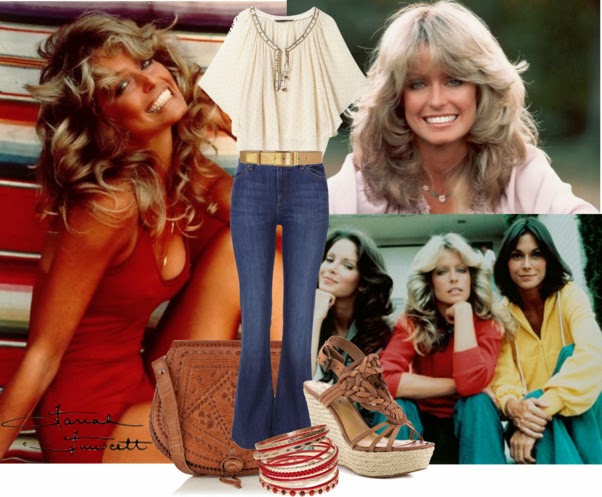 When looking back at 1970’s fashion icons, the first name that comes to mind is Farrah Fawcett. With her blond ‘feathered’ hair, gorgeous smile and Californian tan she was the ultimate 70’s sex kitten and became the symbol of a whole generation.

Although Farrah Fawcett first rose to fame when she played private detective Jill Monroe in the first season of the TV series Charlie’s Angels, it was the poster she shot in the same year that sent her to pop culture icon status. Picturing her in a red swimsuit, the photo was an instant success and soon featured on every teenager’s bedroom wall (you can even spot it in John Travolta’s bedroom in Saturday Night Fever).  12 million copies of the poster were sold worldwide.

It wasn’t only men who admired Farrah though. Women envied her athletic figure, sex appeal and most importantly, her hair style! Originally created by stylist Allen Edwards, Farrah’s layered haircut and its legendary ‘flick’ was copied by millions of women and came to be simply known at ‘The Farrah’.

Fresh faced and always smiling, Farrah represented the girl next door and as such her fashion style was relaxed. Her favorite look consisted of high-waisted jeans paired with blouses, tees or simple jumpers. She rarely wore a bra which only added to her sexy care-free image. She also knew how to glam things up in the evenings by picking dresses that would show off her killer figure. The gold chain-mail dress she wore at the 1978’s Academy Awards (designed by Stephen Burrows) remains one of her most iconic looks.

Farrah Fawcett died in 2009 following a three year battle with cancer. She documented her cancer journey as a way ‘to help and inspire people’. ‘Farrah’s story’ was watched by over 9 million people upon its screening. She will always be remembered not only as one of the most beautiful women in the world but one of its bravest too.

Original post and shop at
http://prettymayhem.com/ultimate-fashion-icons-farrah-fawcett/
at 11:56 AM No comments: 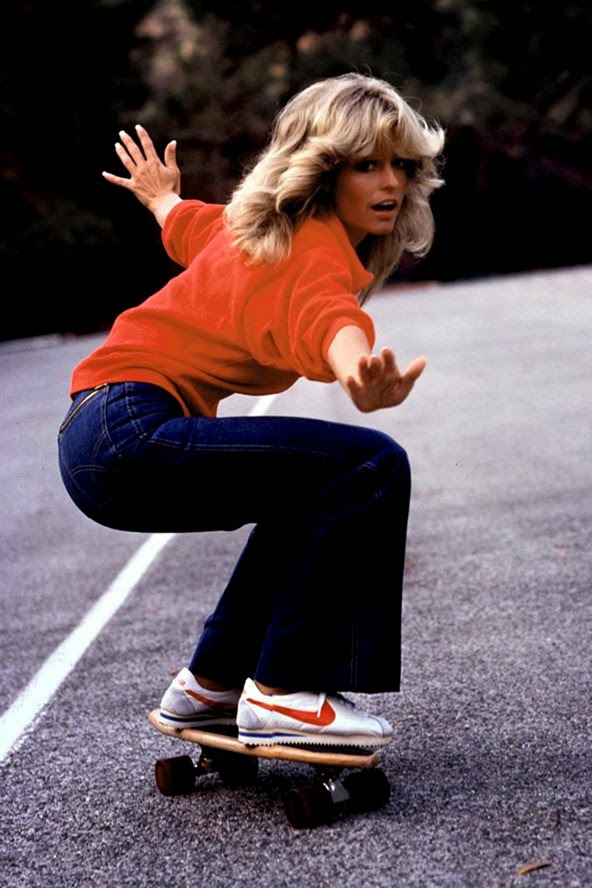 From the naïf, buttoned-down shirts to the high-waisted denim flares, not only did Fawcett set the small screen alight but her look came to define a generation. The ‘Farrah Flick’ became the first must have celebrity hair style and the image of the actress in a swimsuit, head tilted back and grinning broadly, has sold over 12 million copies worldwide. She is consistently name-checked by designers when a 70s revival rolls round.

Original article here; http://www.glamourmagazine.co.uk/fashion/celebrity-fashion/2011/03/70s-fashion-style-icons#!image-number=1
at 11:50 AM No comments: