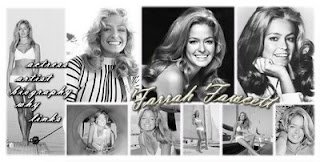 This was the first version of the site. I'd drafted out the entire site years earlier before I learned how to code. I believe I drafted it in Publisher (such a basic program now) in 1991. And though the site wouldn't debut for years, I kept the rough draft stashed away (the print out, I never did find the old Publisher file, I suspect it's on an old ZIP drive... remember those?) and eventually after years of working as a Marketing/Graphic Designer for companies in San Diego and Los Angeles I started developing and creating the site that you see today. 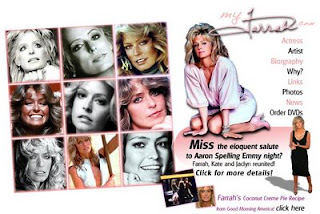 One of the earlier layout screens with links

This was one of the earlier entry pages. I continually updated the site as I learned more and wanted it to be more graphically interesting. This one was used in 2006 shortly after the original trio's appearance at the Emmy's in a tribute to Aaron Spelling. I thought the navigation was somewhat clunky and dated... 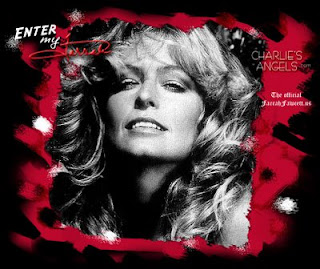 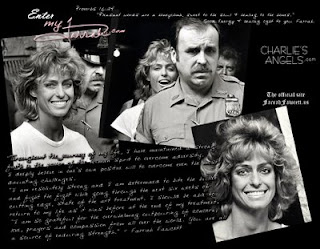 I came up with a more, what I thought interesting look. Based more on Farrah's artistic side. I was attempting, in my mind's eye, to create something I thought she'd like to see. For a while I had the two sites running, the more modern and the more traditional, but eventually scrapped both to go with a more magazine looking site. 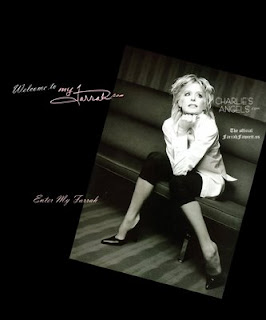 This was one of the early entry pages. I abandoned entry pages, pretty much altogether shortly after I read how they circumvent site listing and search engines really don't index sites with entry pages... so these quickly went away from all the sites I design. 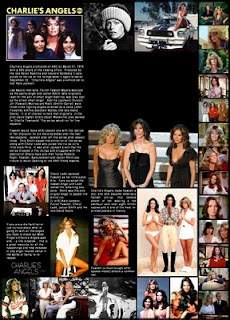 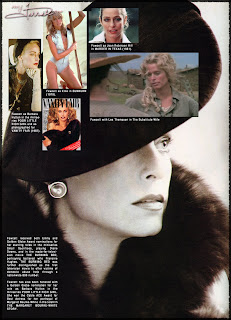 These were mock-ups for videos to be plugged in. Initially the plug in fit but didn't operate the same on all platforms. The text was small and hard to read.
Overall, I was pretty happy with the magazine type layout. I wasn't happy with the video plug in... it's now FLASH so nothing hiccups and you don't' get a weird error message when the video loads, it's already there. I found upon cross platform verification that things ran great on a PC but no so much on a MAC. Making sure your site runs the same, exactly the same on any platform is vital if you want to retain people looking at your site. It's also pretty embarrassing if you pull up your site to show off and it doesn't work or whacks out in front of people.
Over the years I have become very proud of the myfarrah.com website. At first I was a little embarrassed as it was always the first site people would mention. Usually with a, "So, you like Farrah huh?" And I would quickly blush. But I'm shy in general so I get embarrassed about pretty much everything.
In fact when I did meet Fawcett, I sat down the night before and wrote out a note in a book for her to read. I was consumed with worry about what I would say, how it would come out and I didn't want to stand there blinking. When I finally stood in front of her at the LA Museum of Art, I handed her my book and she quickly read the note and told me that I was "very sweet." I don't remember what I said to her. I remember telling Keith, "I really liked the book," and later made fun of myself for that comment. But I do remember thinking she has the greatest voice. I likened it to maple syrup in one of the banner screens. If maple syrup could talk it would have the voice of Fawcett.
Anyway, I don't know how long the site will stay as it appears now before I get bored with it and go a completely different direction. I hope you enjoyed this little trip down the evolution of myfarrah.com.
at 10:47 AM