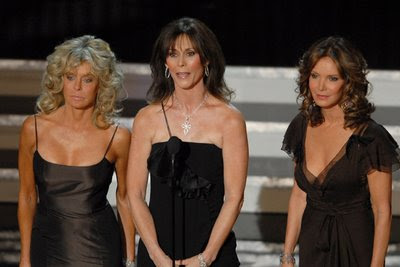 Farrah, Kate Jackson and Jaclyn Smith at the Emmys (2006)

Breaking her silence for the first time since her Charlie's Angels co-star Farrah Fawcett passed away yesterday, Kate Jackson (right, with Fawcett in 2006 at the 58th Annual Emmy Awards) chatted with EW exclusively today. The former Angel talks about how hard it is for her to talk about her dear friend, the first time she saw the "gorgeous, magnificent, glorious" Fawcett, and the legacy that the Hollywood legend left behind. Here is what Jackson told EW:
"I didn’t plan to do any interviews today. I was just going to go to the place that Farrah and I were together the last time we were together during this three years and just sit. But I love her so much. There’s no way that I couldn’t be part of a tribute to her, and you know, just give people my impressions of who Farrah is.

"I just remembered a minute ago that right after I came to Hollywood from New York, I went to my first party where there were Hollywood people, and I walked in the door, and I knew that Lee Majors was married. I saw Lee Majors. He was the first star I had ever seen. Then I realized someone was with him, and I was almost blinded by the most gorgeous, magnificent, glorious girl about my age, who was talking and laughing with him. I just froze and stared, and I thought to myself, 'Oh God, the competition is really bad around here.' And it [turns out the girl talking with Majors] was Farrah. I told her that later when we finally met because we didn’t meet that night—we officially met doing Charlie’s Angels—that she was the person that almost made me go home. I told her that she was darn lucky that I was still here to do this show because I almost went home because of her, when I saw her I thought, 'Oh God, I better go home and, you know, be a teacher or something.'

"She was so funny, and we had the best time that year that she did Charlie’s Angels because we got into the habit of just sort of ad-libbing on camera and trying to make the other one laugh, or doing something unexpected. I remember once, where other actors and actresses fight for their close-ups, we fought to see how tightly together we could get our heads so we could do a tight three that would be as tight as a close-up. We just wanted to go home! We were so tired! There was one scene… Jackie [Jaclyn Smith] was sitting on one end of the couch, and I was sitting on the arm of the couch leaning over toward her, and Farrah was standing behind the couch, behind us, leaning forward so that all of our heads were real close together. It was 11 o’clock on a Friday night, and you know, we finally said to the director, 'Now that’s a close up, isn’t it? It’s as close as you can get! Look, we’re all in there, and our heads aren’t even cut off.' So she had some line and was supposed to walk out the door. She said the line and straightened up and started to walk out the door with that energy, you know, and as she walked out, she just sort of tapped me on the shoulder. She knew what was going to happen. I completely lost my balance and fell off the arm of the sofa. They kept rolling and I said, 'I can’t believe you did that!' She was walking out the door and looked back at me and laughed. It was actually in the show. I saw it in the show that week. They left it in! They left in a lot of the stuff we did.

"When the first year of Charlie’s Angels ended, our friendship didn’t. It just grew stronger and closer through the years. I don’t know what the connection that the three of us have is, but it is there, and it is something extremely special. I think that is the reason the show worked. I think it’s even better than the movies because we truly cared about each other and still do. It was a pleasure and a privilege.

"It was not easy at times to be able to be with her these last three years and to be able to continue laughing. There was always, if few words were spoken, a zinger, though. Then there’d be a little light laugh, even through everything. She was just extraordinary and bright and as sharp as they come and beautiful and her courage, I just… I don't even know what to say about that. She was never a follower; she was always a leader. Her choices were her choices."