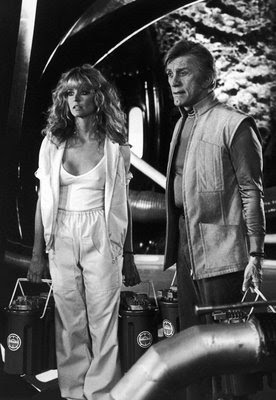 Fawcett and Douglas in Saturn 3

Washington (ANI): Film producer Kirk Douglas has expressed grief over the death of Michael Jackson and Farrah Fawcett , and also said that it reminded him of his son Eric who died at the age of 46.

Buzz up!Douglas wrote on his MySpace blog, "This has been a sad week. We don't like to think about it, but we all know that someday we will die. But, when someone dies young it makes us think about the preciousness of life," Contactmusic reports.

Kirk who acted alongside Fawcett in 1980 sci-fi movie Saturn 3 wrote: "I did a movie with Farrah Fawcett in London. What a beautiful girl with a great sense of humor." He remembered the pop legend, stating: "Michael Jackson gave millions of people all over the world enjoyment. Yes, he had his problems. It's sad to think of such a great talent extinguished when his light was burning so brightly."

He further added: "It makes me think of the people in my profession that have died too young: Steve MCQueen, Natalie Wood, Marilyn Monroe . I know the pain of personal tragedy, my son Eric died at 46. When I visit his grave every week I see fresh flowers at the gravesite of Marilyn Monroe. While we mourn for the deaths of young people like Michael Jackson and Farrah Fawcett, let us think about how precious life is and resolve to make it worthwhile."