Inside Story: The Private Farrah Fawcett from People.com 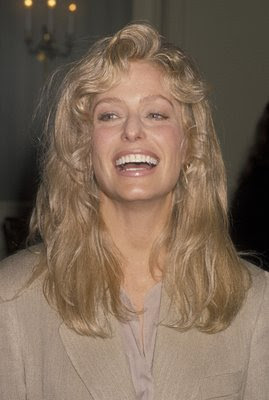 To most of the world, she was the sex symbol with the flowing hair and dazzling smile – but Joan Dangerfield remembers Farrah Fawcett as the daredevil friend who took her out for a night of breaking and entering.

A few years ago, after the death of Joan's husband, comedian Rodney Dangerfield, Fawcett stopped by her house in the Los Angeles hills with a bottle of tequila.

"We stayed up all night long, talking and laughing and making plans," recalls Dangerfield. "Farrah decided that she wanted a house up here too." They set out to investigate a house for sale.

"We rang the doorbell, but it was clear that nobody was home. The next thing I know, Farrah climbed the gate –a big iron gate with spikes on top. I remember thinking she must have done her own stunts on Charlie's Angels. Within minutes she was waving at me from inside the house. Finally, she comes bouncing back down the driveway and she said, 'No, not for me, they have green toilets.' "

Fawcett, who died on June 25 at age 62 and will be honored with a private funeral in L.A. Tuesday, was "genuinely funny and genuinely caring," says Dangerfield – "the kind of friend who would show up with a German chocolate cake she baked from scratch and tell stories all night, acting out every part."

All in Stride
Another longtime friend, David Pinsky, recalls her competitive spirit. "When I first moved to L.A., she bet me that she could easily outrace me. So up Mulholland Drive we went, at speeds I should never disclose, and guess who got there first?"

Yes, Fawcett – who, Pinsky adds, never took herself or her fame too seriously. She would head out for Mexican food at her favorite dive restaurant in Sherman Oaks, Calif., and graciously sign autographs. "She would joke that she didn't think her fan base extended to the Valley," Pinsky says.

When she returned to the Late Show with David Letterman for the first time after her notoriously incoherent 1997 appearance, "her PR team ran around stressing," Pinsky says. "All Farrah seemed to care about was finding a great pair of shoes to wear on the show. She never had too great of a concern about what others thought of her, she simply wanted to have a good time, laugh and entertain."

Always with Grace
Even her 2½-year battle with cancer didn't dim her personality. "She remained kind and strong and funny even in the face of this vicious enemy," says Dangerfield. "When she would go in to get chemo or radiation and she'd see the other people suffering, she would talk to them. She'd want to know all their stories. And she was willing to share her story with others to lend them her strength."

About a week before Fawcett died, Dangerfield visited her in the hospital. Fawcett had been weak, but that day, she sat up in bed and demanded a steak dinner. Dangerfield rushed to a restaurant for takeout, which Fawcett devoured.

"We sat on the bed and talked about fashion, Obama, just letting the conversation flow without a care. She said, 'Shouldn't we have music?' The nurse pushed a button and on came a song with the line 'calling all angels.' She was laughing." Fawcett, says Dangerfield, "breathed a different air. She was such a joy to be around."