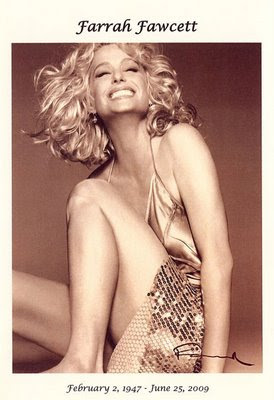 Farrah Fawcett was beautiful even in death and the program for her funeral has a cover photo of the 70's pin up star smiling and looking full of life.

The back cover is a shot of the back of Farrah as she peeps through a tall wooden door. "At That Hour," a poem by James Joyce is on the inside of the cover and the Order of Service listed Redmond O'Neal doing the first reading from the Bible, Lamentations 3:17-26 and Ryan O'Neal doing the second reading from Wisdom 3:1-9. "To Where You Are," a song written by Richard Marx and Linda Thomspon was played as well as "The Prayer," written by Carole Bayer Sager and David Foster.

The Reverend Alexander Salazar read the Prayer of Commendation at the end of the service
Source: Radaronline.com 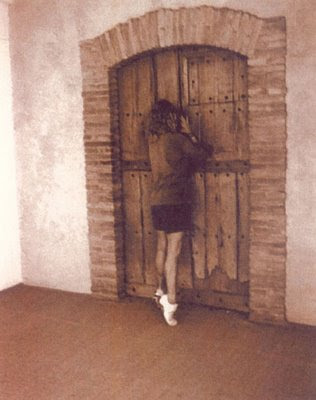 O'Neal, the long-time companion of the "Charlie's Angels" star, was one of the pall-bearers and gave a reading at the service at Los Angeles Roman Catholic Cathedral of Our Lady of the Angels.

Redmond O'Neal, the 24-year-old son with Fawcett, Griffin O'Neal and Tatum O'Neal, reportedly attended the funeral service. Redmond also gave a bible reading, according to a program made available to the media.

Fawcett's coffin was taken into the church as a quartet of musicians played "Amazing Grace" and Irving Berlin love song "Always", according to the program.

Condensed from Reuters.com
at 5:12 AM