Just over two years since Farrah Fawcett’s death from cancer at the age of 62, two reminders of happier moments in her life and career are appearing, and both are related to the iconic Bruce McBroom poster that helped launch not just Fawcett’s career but also the feathered hairstyle that defined a generation. 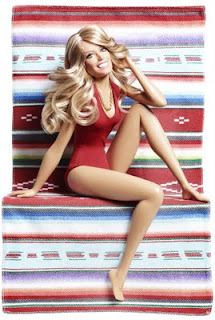 Mattel’s Barbie Collector Farrah Fawcett doll, a three-dimensional rendition of the poster -- right down to the one-piece red bathing suit, gold necklace and striped beach blanket -- is now available. (In November the doll’s prototype sold in 20 minutes for $1,500.) And joining the Smithsonian’s “National Treasures of Popular Culture” permanent exhibition this summer is the self-same red swimsuit donated in February by Fawcett’s longtime romantic partner Ryan O’Neal.
Alana Stewart, who was Fawcett’s close friend for more than 30 years and is the president of the Farrah Fawcett Foundation, says she always asks herself, “What would Farrah do?” She thinks her late friend would approve. The poster, Stewart says, represents “a sexy, all-American beauty; there is an innocence to it.”

Stewart believes that these reminders of the former “Charlie’s Angels” star will draw attention to the foundation Fawcett started two years before her death. “When we were in Germany [for treatments], Farrah told me she was glad she got cancer, because now she could make a difference,” Stewart said. The foundation, which is private, funds many nonprofit organizations, including some that do research in cutting-edge treatments and others that provide patient assistance programs.
The foundation receives a royalty, which it would not disclose, from each Farrah Barbie sold. Stewart says there are plans for more projects that will carry on Fawcett’s legacy.
The Farrah Fawcett Barbie is available at www.barbiecollector.com for $34.95.
at 5:03 AM