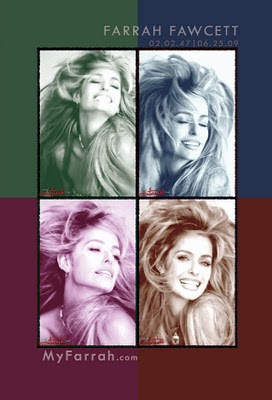 The late Farrah Fawcett donated a substantial amount of money to facilitate the creation of a cancer charity.

According to RadarOnline.com, actor Harrison Ford was one of the first people to donate to the charity, handing over a personal cheque for $5,000.  Financial records show the foundation donated $85,000 to two charities last year, The Angeles Clinic Foundation and St. Jude Children’s Research Hospital.  The documents reveal the foundation is currently worth at least $5 million.
Following her death, it was revealed Farrah had left the bulk of her $10 million savings to troubled son Redmond O’Neal, 24, while her long-term partner Ryan O’Neal was excluded from her will completely.  In June, Farrah’s friends and family – including Ryan, Redmond, Ryan's daughter Tatum O'Neal and best friend Alana Stewart – gathered at the new offices of the Farrah Fawcett Foundation, and pledged to continue the work started by the late star.

Alana said: “If I can help carry on Farrah's mission for the foundation, it's an honour for me. I feel almost like she's a guardian angel watching over me, and I feel like she's smiling down on us and very happy that she died for a cause.”  “She felt that she could help a lot of people and she could give a lot of people inspiration, courage and hope. “ - Bang Media International