As a Character Actor David Doyle brought enthusiasm and relatability to a little TV Series on ABC in 1976 called “Charlie’s Angels.” As Bosley, Doyle was often called upon to navigate the opening sequence of case exposition (answer Charlie’s phone call and putting it on the speaker while the Angels watched a Slide Show presentation of the suspects involved) and would often pose as a comedic decoy. He portrayed an old Swamp Grandpa in the pilot episode and several other notable creations, such as a Rich Horse connoisseur shopping for his sweetheart Jenny-Lou. A series that created an international sensation out of Farrah Fawcett (then the famously hyphened other half of Lee Majors) and boosted the already recognized Kate Jackson and introduced another TV Beauty Jaclyn Smith making richer men out of Aaron Spelling and Leonard Goldberg.

The series did not land on a cloud of praise from Critics. Dubbed, “Jiggle TV” and exploitative it seems tame watching it now on iTunes or DVD. A show that brought uproar from parents and women’s group over three females running throughout Los Angeles without wearing bras. Indeed by today’s TV standards that point would be a solid Rated G. But before DVR and VCR’s existed (Remember VHS and Beta?) this little show that ABC thought was a “flash in the pan” made ratings and superstars out of its heroines.
BUT back to Doyle.

Doyle was quoted as saying upon reflection of his work on Angels that he was grateful. It put his kids through college and it was a steady job. The goal of any working Actor: working. Doyle brought warmth, humor and a deep commitment to dialogue that wasn’t Shakespeare worthy but definitely entertainment worthwhile. The often unsung actor who made the every-man the center of a trio of unearthly beauties was often overlooked in reunions and reunion specials and even special remembrances, such as “where are they now,” but he continued to work, and like Jaclyn Smith, stayed the entire run of the series with no less energy and comedic ability than that very first episode.

Doyle passed away in March of 1997, having last worked as a voice actor on the series “Rug Rats” Doyle left an indelible mark on celluloid. This veteran actor who appeared on Broadway and film, in addition to television, brought much to this under-appreciated role and in the test of time, the series, albeit not very controversial by today’s standards still is enjoyable to watch and enjoy. Isn’t the true test of entertainment? The test of time and endurance. 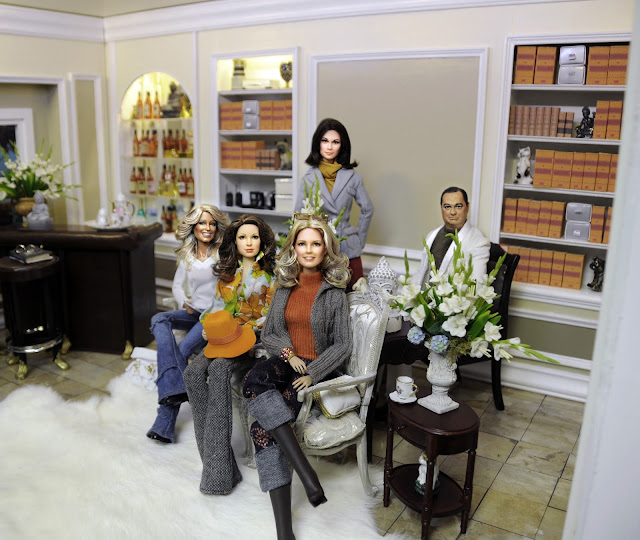 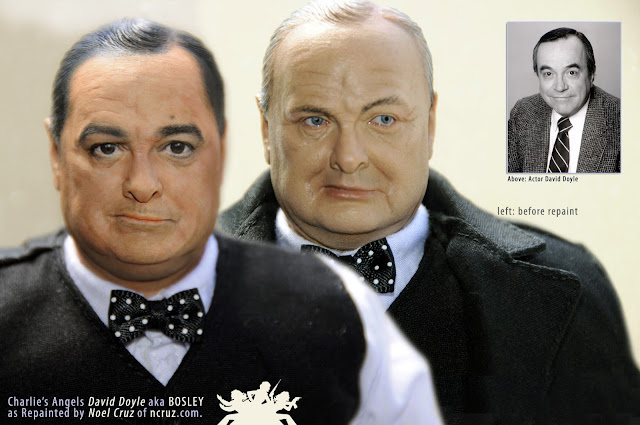 Photos of Doyle and as repainted by Noel Cruz of http://www.ncruz.com along with other repainted and restyled Angels also by Cruz.

David on Wikipedia: https://en.wikipedia.org/wiki/David_Doyle_(actor)
at 12:34 PM No comments:


Jaclyn Smith opened up to ET about how she pays homage to her late Charlie's Angels co-star, Farrah Fawcett, by continuing her legacy of goodwill. "I think she wanted to leave behind a legacy," the 69-year-old actress told ET. "It's wonderful to have watched her never give up."

Smith has been active with the Farrah Fawcett Foundation since the actress died of cancer six years ago. According to the website, the foundation's mission is to "provide funding for cutting edge cancer research, prevention and to help those struggling with cancer today." WATCH: Farrah Fawcett's Never Before Seen Home Videos

The mission is fitting for Smith, who was diagnosed with breast cancer in 2002. Last month, Smith attended the Farrah Fawcett Foundation Presents First Annual Tex-Mex Fiesta Benefitting Stand Up to Cancer in Los Angeles, where she was honored with a Shining Star award. In addition to her work with the Farrah Fawcett Foundation, Smith has also teamed up with famed hair stylist Jose Eber and the City of Hope to provide wigs for cancer patients. "Men can shave their head and look cool and modern and trendy, but a woman really has to have a sense of self to be able to carry that off," Smith said. "You have to have these added enhancements to bring you back up."

You can also
SHOP FARRAH TOO!